Author Tammy Vreeland
The con this year was such a huge success! I'm sure a lot of it had to do with finally getting to have one after so long. But the energy that filled the room in itself was contagious! Probably not the best word to use but you know what I mean.

I have a quick story I want to tell that happened at the beginning of the con and carried all the way through the con! One that is too funny not to share, even at my own expense!

It started Friday night, I had Pickles the Clown escort me into the room where all the Stars were stationed. As you know, my table was among the other vendors in a separate room. Being star struck, after we came back, I proceeded to brag to my husband how I just met Dan Aykroyd!!! That I talked to him for like 15 minutes and he called me Stevie Nicks!!! Not only did I brag to my husband (like every 5 minutes) but to every patron that came up to my table!!!

After the show, it's close to midnight, we're still dressed and we're heading to our room. We pass the main co-ordinator in a conversation with a VIP. We nod as we pass. Just as we pass, a wild group of bachelorette party rushes towards us. Oh my God! Oh my God! You look so great, can we get a picture??? What's this all about??? Knowing the co-ordinator could hear us, I explain how awesome the show is (which it was) how many vendors there were, that even I had a table AND we even have Dan Aykroyd here!!! The main co-ordinator is right over there. Oh my gosh!!! Excited they run over to the co-ordinator and thank him, excited to add it to their weekend!!!

Thinking nothing of it, we go up to change. We then came back down, to go get a very late dinner. We see the co-ordinator with a group of the staff. We walk over to talk. He asks me, Tammy did you really see Dan Aykroyd? If so, where is Dan Aykroyd??? Confused, because obviously he should know since he co-ordinated the event, I point to the room and say in that back corner! He goes... No, Tom Arnold was there!

My heart drops, my face turns bright red as it all comes over me my mistake and ...how many people I told it to!!! Ugh. They sort of laugh it off, my husband busted my balls so bad the rest of the evening!!! Finally, the day is over and I am so happy to put it behind me ...but is it? The next morning we go down for breakfast and we see our buddy Dave from the Hollow 9ine Network and as we sit down to eat with him he goes, hey Tammy, did you hear Dan Aykroyd was even here yesterday!!!

Suddenly, not so hungry. I smile sheepishly and go no honey, that was me! I mistakenly told everyone I met Dan Aykroyd when in fact it was Tom Arnold. There! I admitted it - now hopefully it will go away!! But noooo, Dave laughs and goes Oh My God! I created a hashtag #WHERESDANAYKROYD and threw it up on Twitter & Instagram because everyone was looking for him!!! Mortified, I go ...you did not!!! Dave shows me, and there it is the hashtag #WHERESDANAYKROYD with Dave pondering where Dan may be at!!! OMG!!!

Dave then goes, this is too good not to let run during the weekend!!! So, during the day Dave continues to post, with pictures of himself pondering, where is Dan Aykroyd? Ok, yea ...this thing is not going away!!! Then Dave gets the bright idea to get poor Tom Arnold in on the action! Dave proceeds to drag me back to the Star's room. Introduces me as... Hey remember Stevie Nicks here? He nodded and then I had to proceed in telling Tom Arnold how I told everyone and their brother, I met Dan Aykroyd!

I have to say Tom Arnold was such a good sport about it!!! He loved it. So then of course - now I have to go back and brag to my husband and every patron that would listen to me how stupid I had been but that Tom Arnold was really cool about it!!! And now, Dave is tagging Tom Arnold along with the hashtag and pictures of Dave looking for Dan Aykroyd!!!

On top of it, Todd Staurch of Horror Nerd who did an interview with me, hears about the story and thinks it'll be fun to tease Tom Arnold when he goes to interview him! Oh man! This thing took on a life of its own!!! The only thing I had to hang onto was, anyone that hears this story - including Tom Arnold, will at least remember it as Stevie Nicks saying it and not my true name! LOL Poor Stevie, hate to set her up like that but she needs to take one for the team! LOL

As the day ended so did our little joke, or so I thought. We went to Scaryokie that night, and one of the Star's handlers comes up to us at the table and yells over the music... Hey, Stevie! Have you seen Dan Aykroyd? If so, where is Dan Aykroyd???

Omg... this thing wouldn't die! Apparently, the story had been a buzz in the Star's room too!!! So, there you have it. If you by chance saw the hashtag #WHERESDANAYKROYD at the NJ Horror Con Film Festival... you now know what it was all about. I later when on a podcast for Dave at the Hollow 9ine Network and tried to explain myself. It will be on youtube in a couple of weeks and I will post the link here when it goes live... immortalizing my stupidity!  LOL

Anyway, I know you are here to see these amazing pictures. Thank you everyone for coming, I had such an amazing time and I can't wait to see you all again in November!!! This time though... gonna tone down the bragging - just in case! ;) 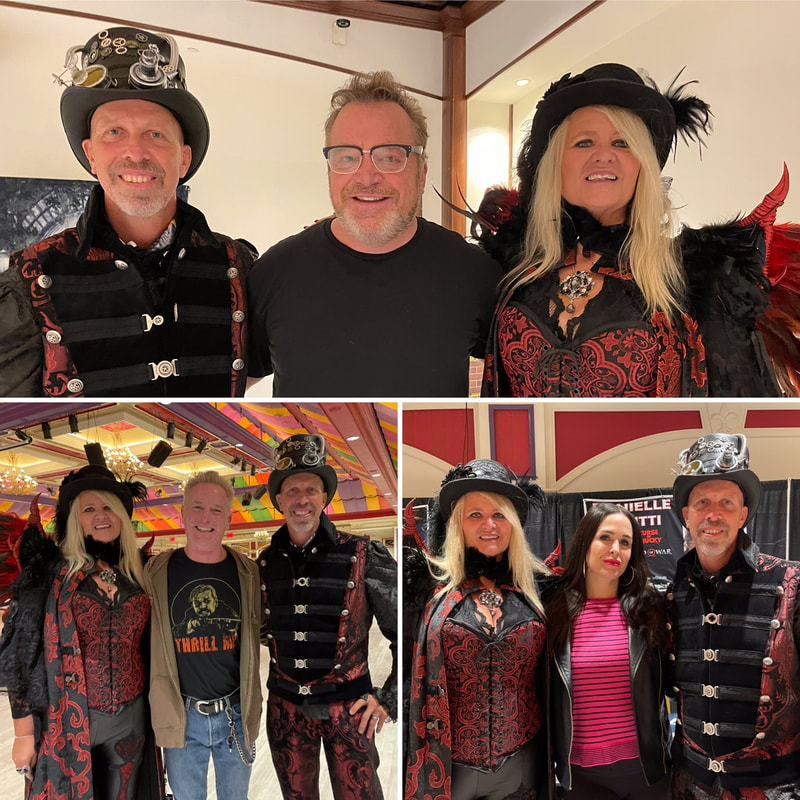 Oh wait! I do have one other story I have to tell! So, I'm talking to the lovely Daniel Bisutti who is Freya in God of War. I told her I wanted a sign pic of her because my son, Tyler, loves God of War! Unfortunately though, he is over in Bahrain right now. She looks at me concerned asking if he was going to have to go over to Afghanistan? I told her not yet, and that Tyler told me he wanted to go but stayed back as an essential. Tyler was actually disappointed in not going. I had asked him why in the world would you want to go? He told me mom, when you see these poor people coming in... you can't help not to want to help them! Daniel goes to sign the photo and asks if she can thank him for his service? I said of course. She looks at me and says no, I have something better in mind... 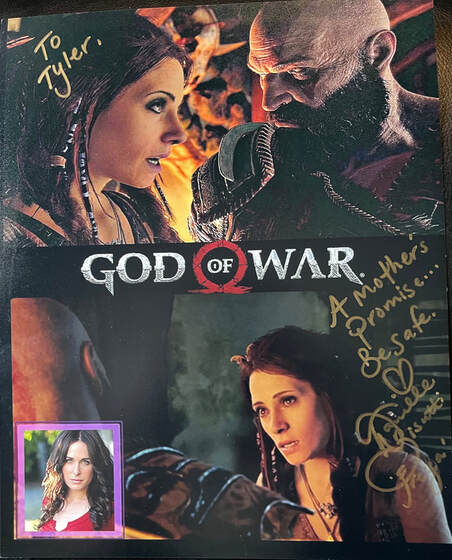 I read that and instantly tears came to my eyes!

A quote, "A mother's promise to her child, I will always be there for you."

As you can see in the picture above my eyes are red. I was trying so hard not to cry. How precious and sweet is this???

Here is an interview with Todd Staurch the Horror Nerd. You can find the original interview along with all his other wonderful interviews here:

Stars and the people that make them the stars - Our lovely Patrons! 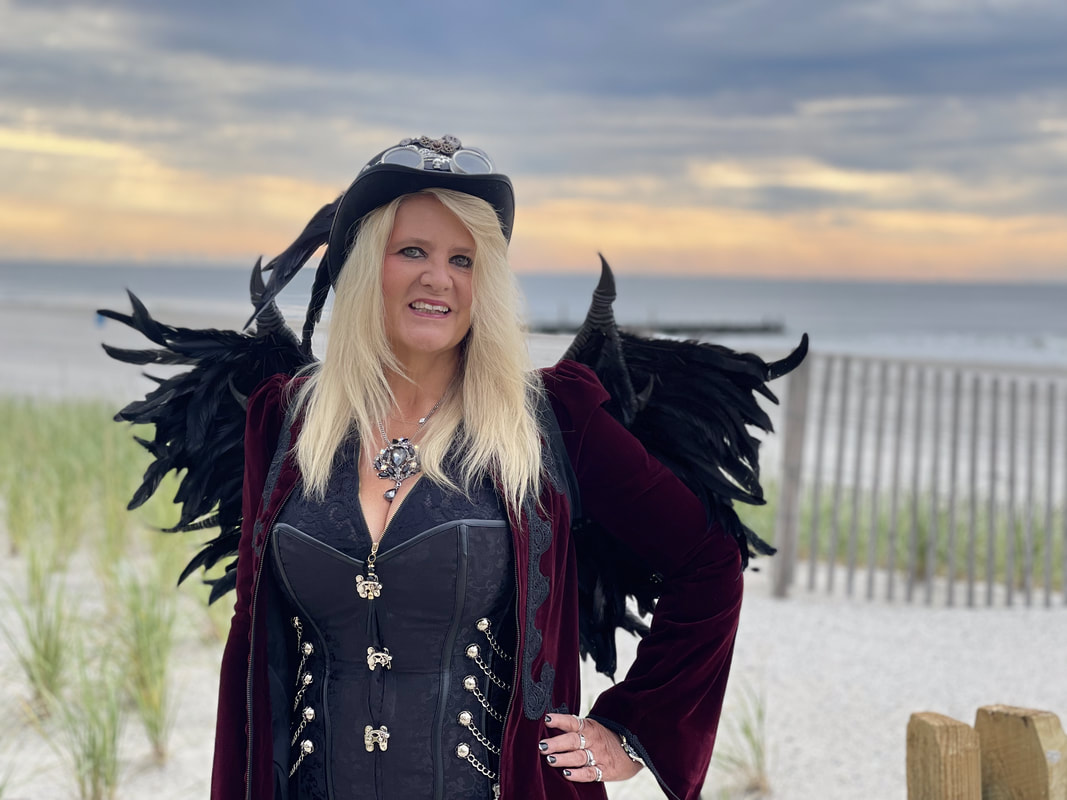